The Pikedale Soldier’s Settlement near Stanthorpe was one of the soldier resettlement schemes established after World War I. The townships in the settlement were named after the French and Belgian battlefields - Pozieres, Bapaume, Messines, Fleurbaix, Amiens, Bullecourt and Passchendaele.
As part of the scheme a 12-mile (20 kilometre) railway was built to connect the newly opened farming area with the Brisbane markets.  The line was opened with great ceremony on 7th June 1920 with each township having its own siding.  Amiens was the main station, Pozieres, Bapaume Messines, Fleurbaix, Bullecourt and Passchendaele were simply sidings with a small waiting shed and a loop siding.
Today little is left of either the townships or the line.  Changes in farm size, population and transportation methods have all taken their toll. The rail line was closed in 1974. 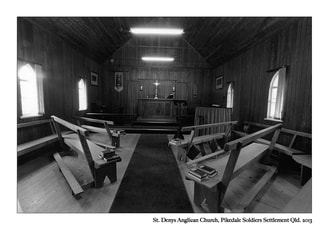 St Denys Anglican Church, Amiens Queensland
Built 1923
As the Pikedale Soldier Settlement church, St Denys has direct links to France, St Denys Anglican Church is significant for its association with those who took up property under the Pikedale Soldier Settlement scheme and their descendants.
It is directly linked to Australian war service in France through not only the dedication of the church to St Denys, the Patron Saint of France, but also through the frontal cloth and altar ornaments, which originate from the Cathedral in Amiens, France and which were used in the military church at the Australian base at Le Harve before coming to Amiens Queensland. 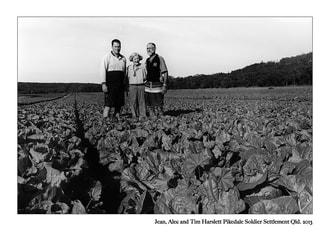 In 1920, 500 returned soldiers each won a 40-acre block of land in a ballot.
The Harslett family is one of three families in the area, who are direct descendants of a soldier who was awarded land in the ballot (Thomas Harslett) and are still farming that land.Over the years the family has gradually acquired adjoining properties. Alec and his son Tim now farm an efficient and highly productive 150 acre vegetable farm supplying produce to east coast capital cities on a daily basis. Jean Harslett is a highly respected local historian and author. 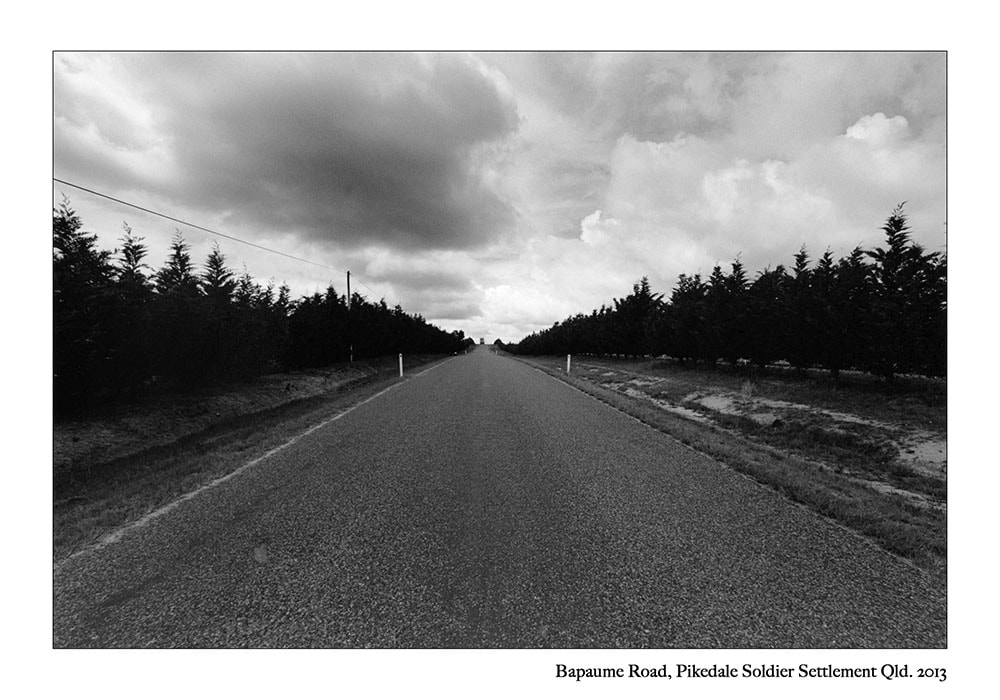 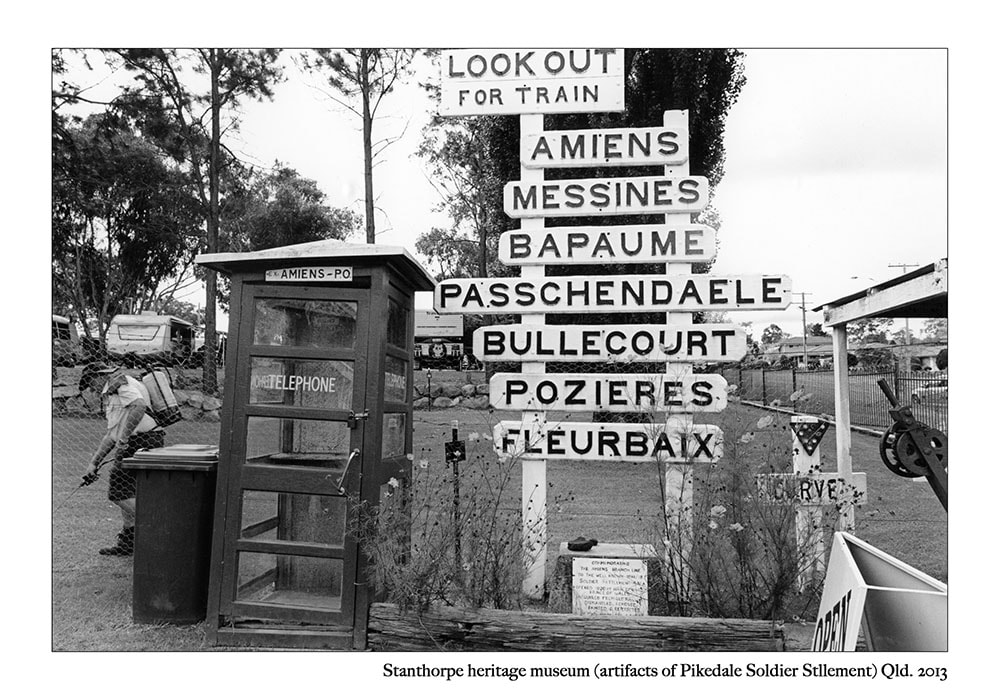 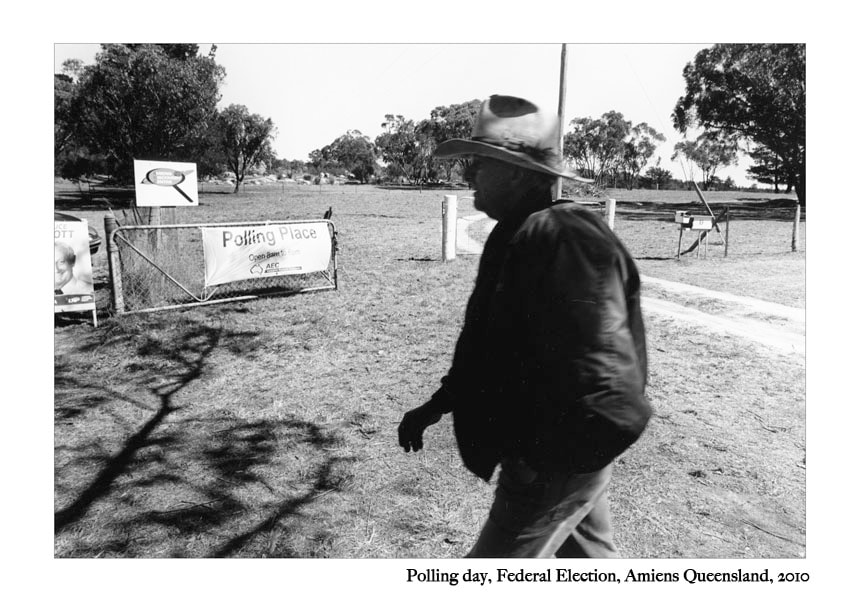 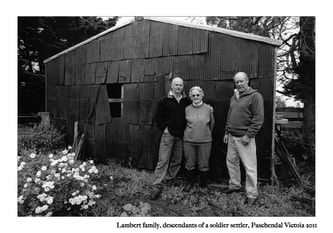 Lambert family, descendants of a soldier settler, Paschendale Victoria 2011
The soldier settlement scheme offered returned servicemen the opportunity of taking up areas of rural land to establish farms. The scheme operated in most states with varying degrees of success. The Paschendale settlement in western Victoria offered soldier settlers 125 acres of land for dairy farming. One of those soldiers was William Alexander Lambert who had enlisted in 1914 and served in Gallipoli and the Western Front before returning to Australia after the end of the war. His two grandsons, Geoff and Billy have expanded the original land allocation to 1700 acres of prime beef grazing land. Their mother Val still lives in the original home and posed with her two sons in front of the shed built by William Lambert out of flattened fuel tins.
William Lambert took his own life in 1942 when his son was facing recruitment for the Second World War. 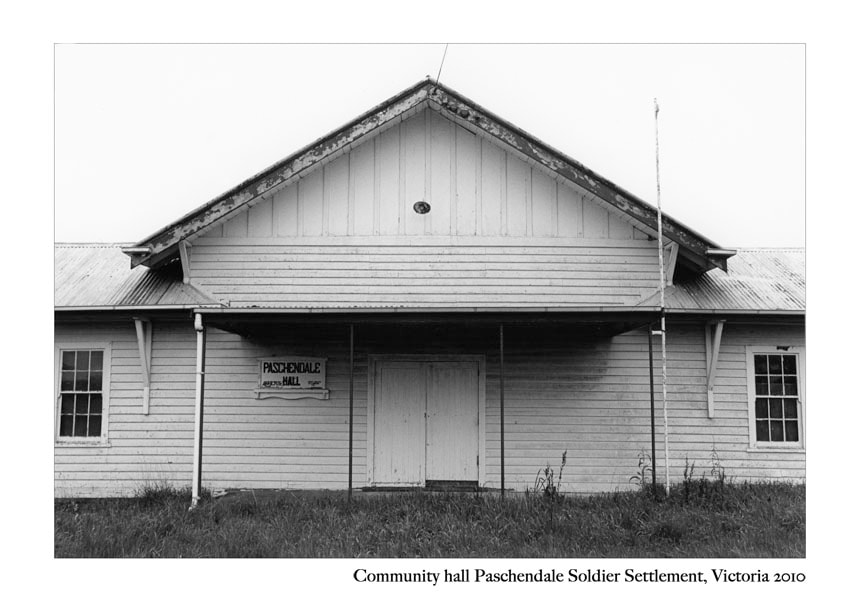 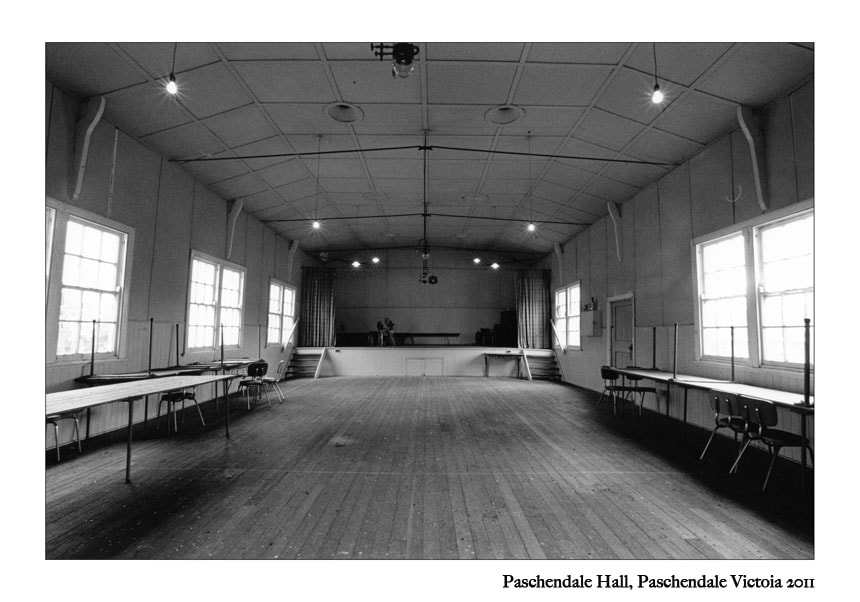 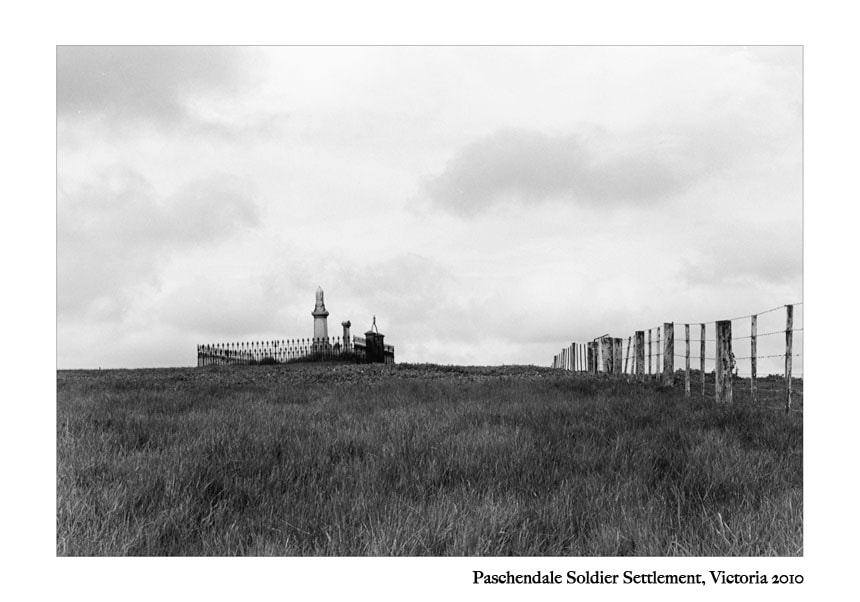 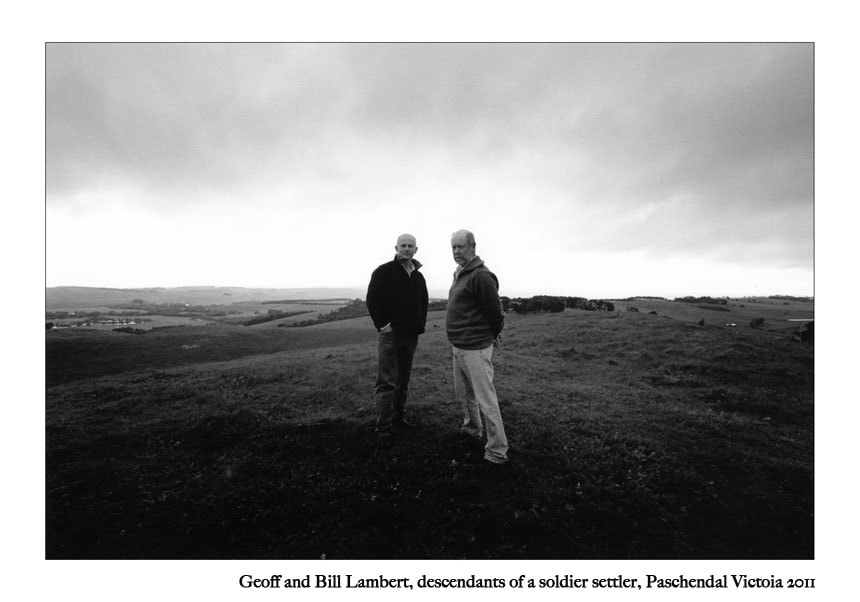 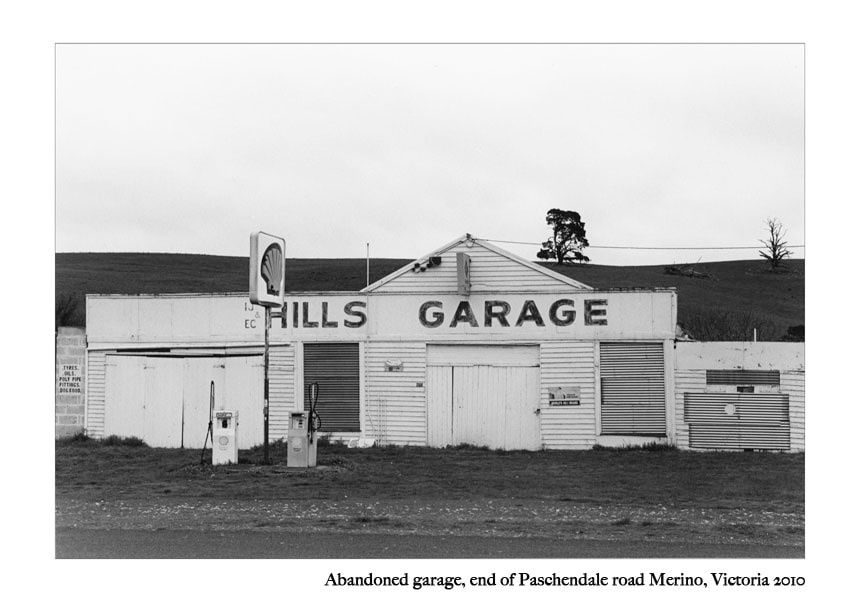 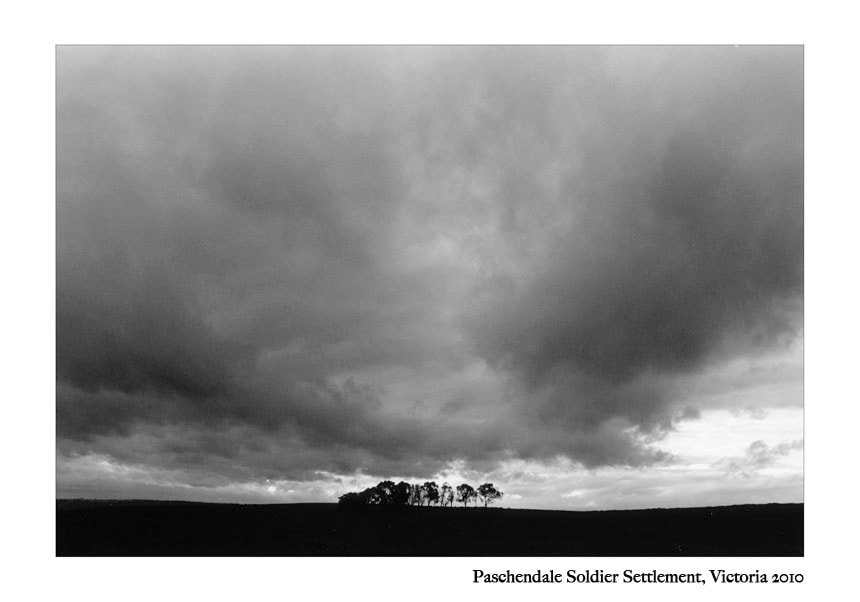 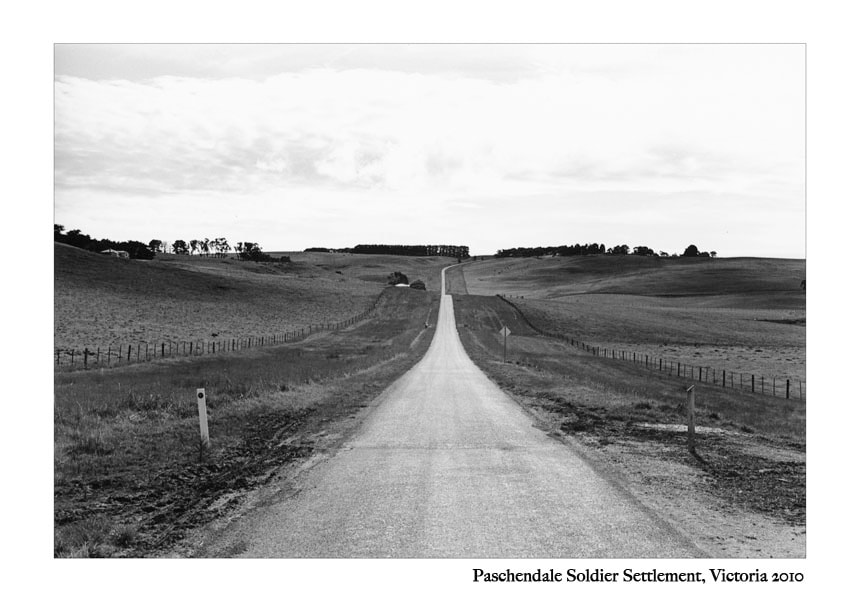 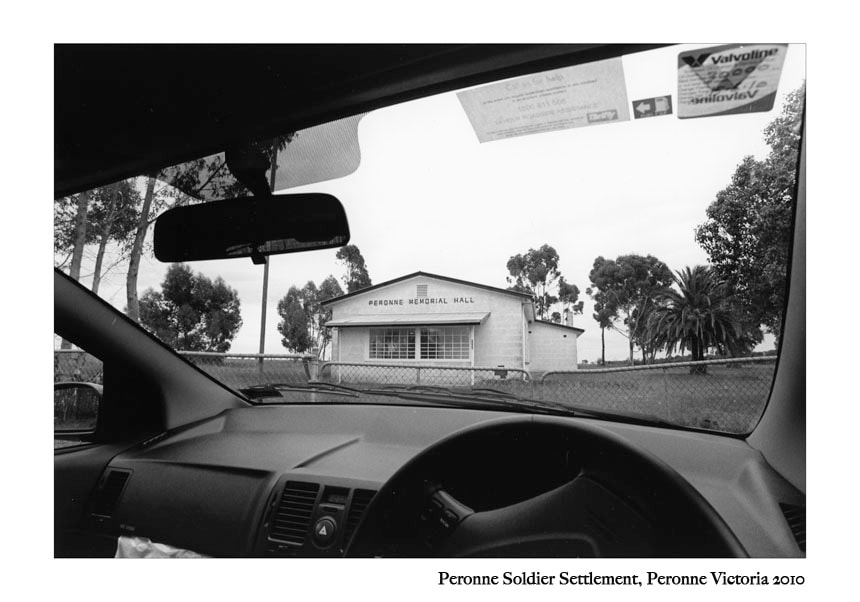 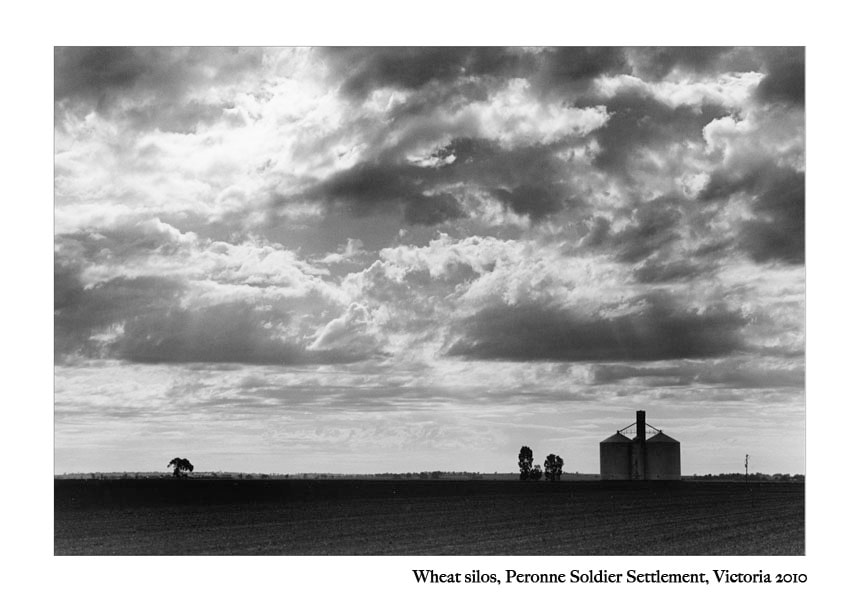 Shepparton Swans (ex Lemnos) vs. Mooroopna, Victoria 2011
The Lemnos soldier settlement was established in the fruit growing area near Shepparton in northeast Victoria. Lemnos was named after the Greek island of Lemnos where the headquarters for the Gallipoli campaign was established. There was also a large hospital where the wounded from Gallipoli were evacuated to.
A unique feature of the Lemnos soldier settlement was that they established their own Australian Rules football team, that club still exists as the renamed Shepparton Swans. As the senior team ran out for their game with the team from Mooroopna, I was reminded that most of these players were the same age as those men that went to fight. 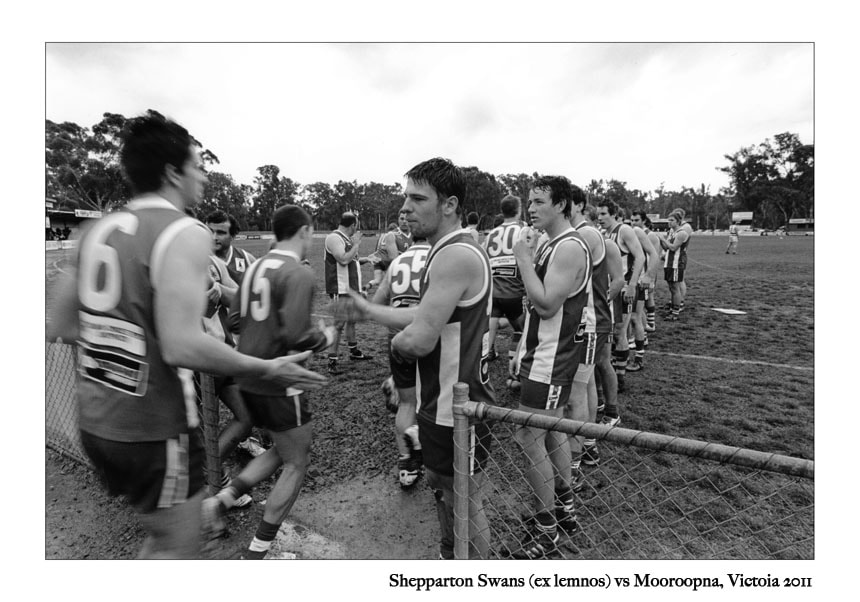 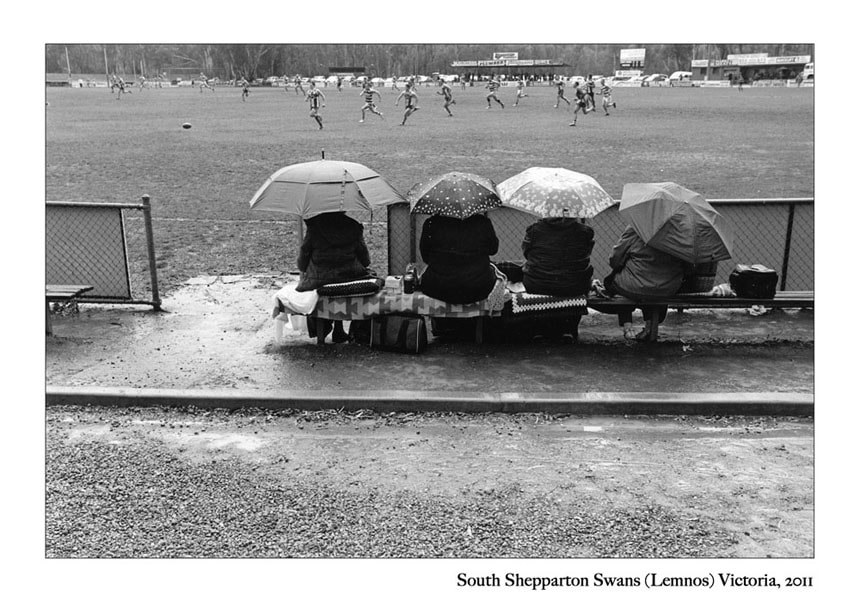 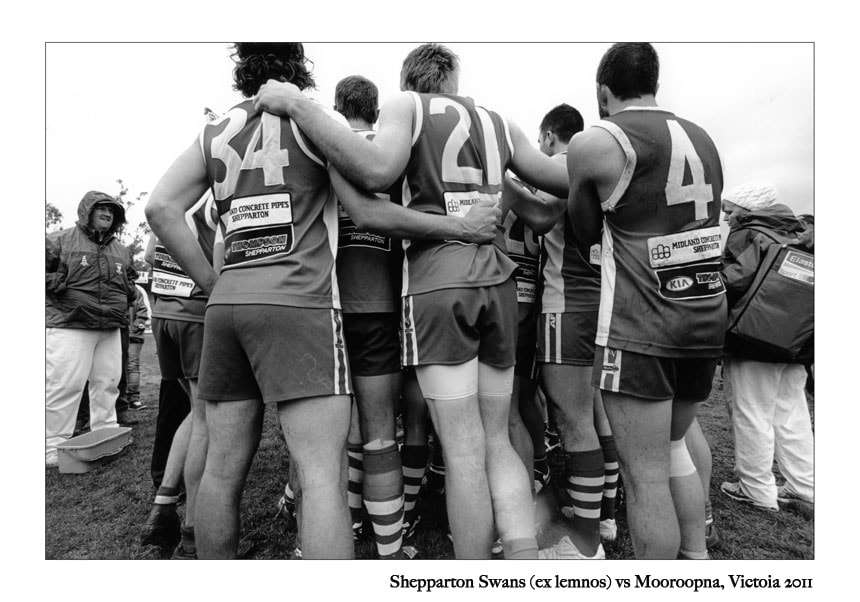 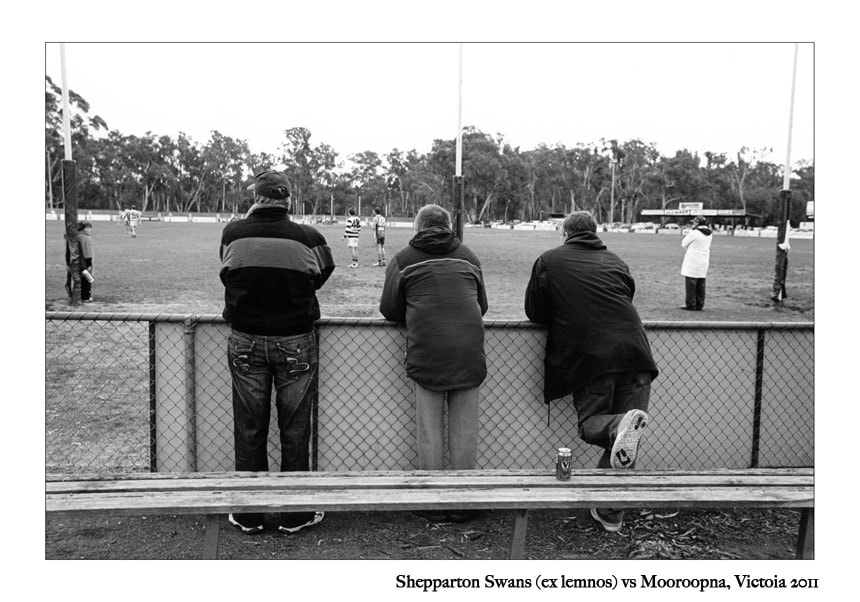 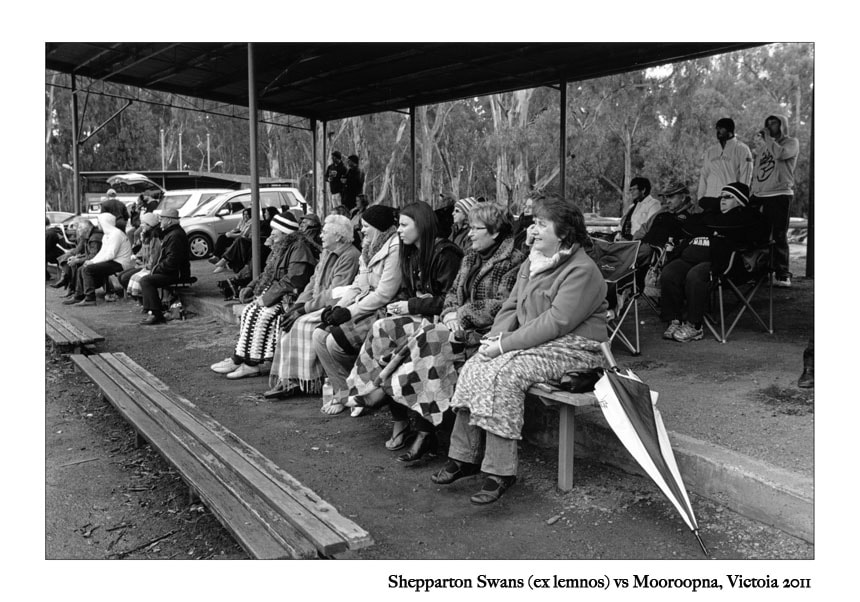 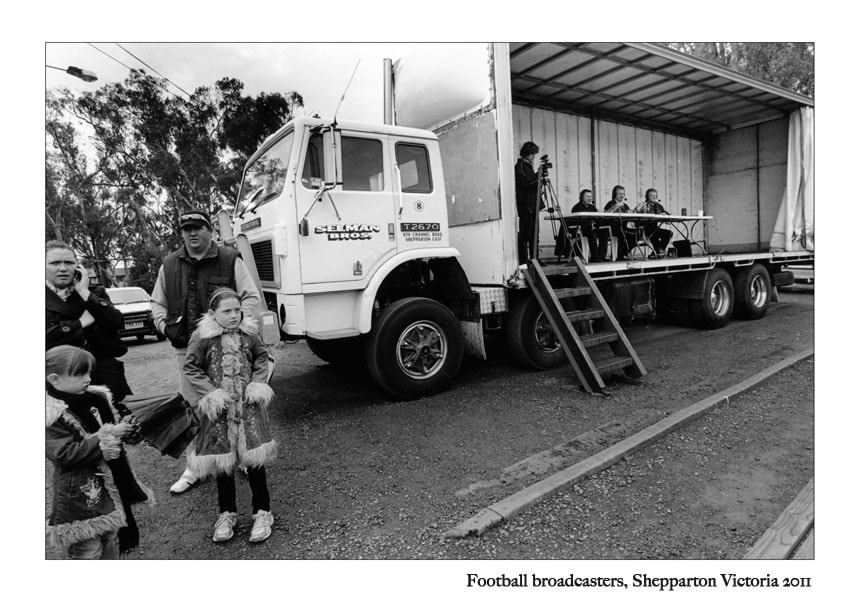 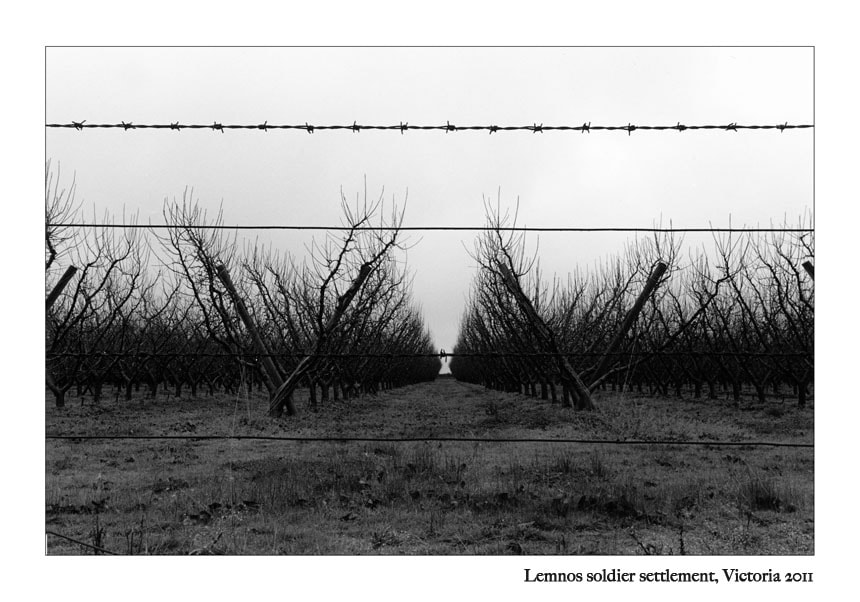 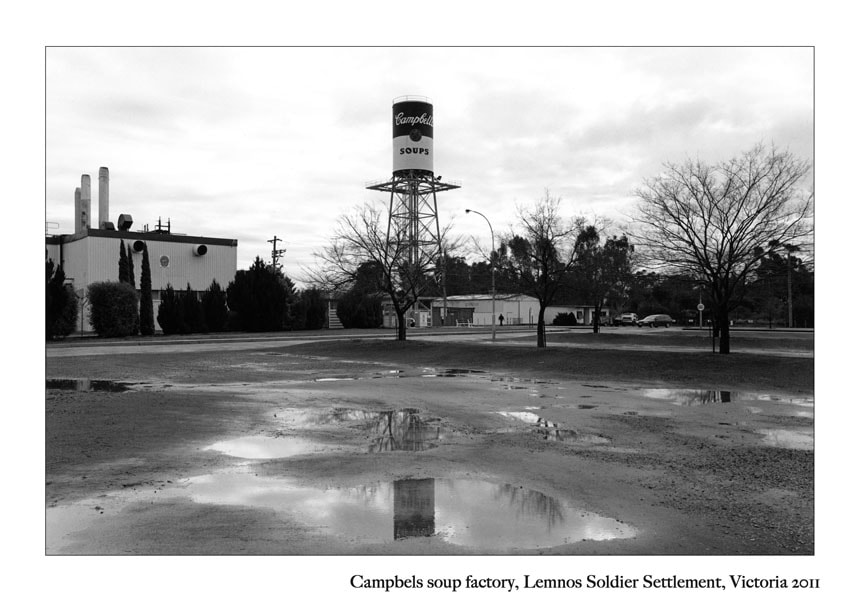 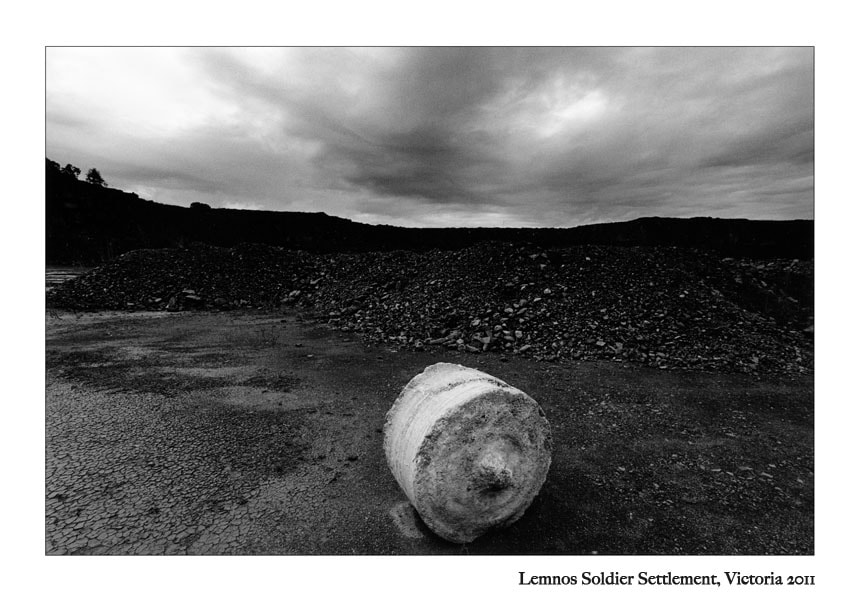 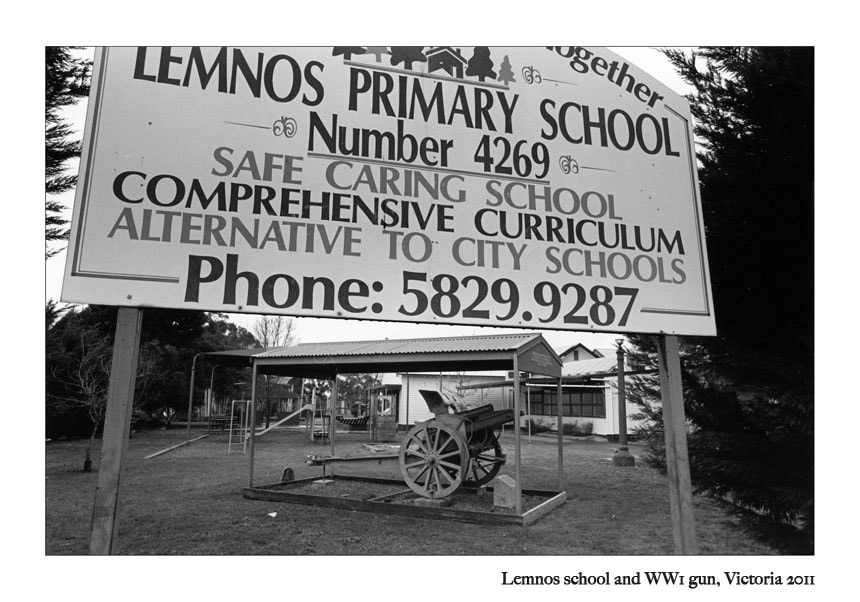 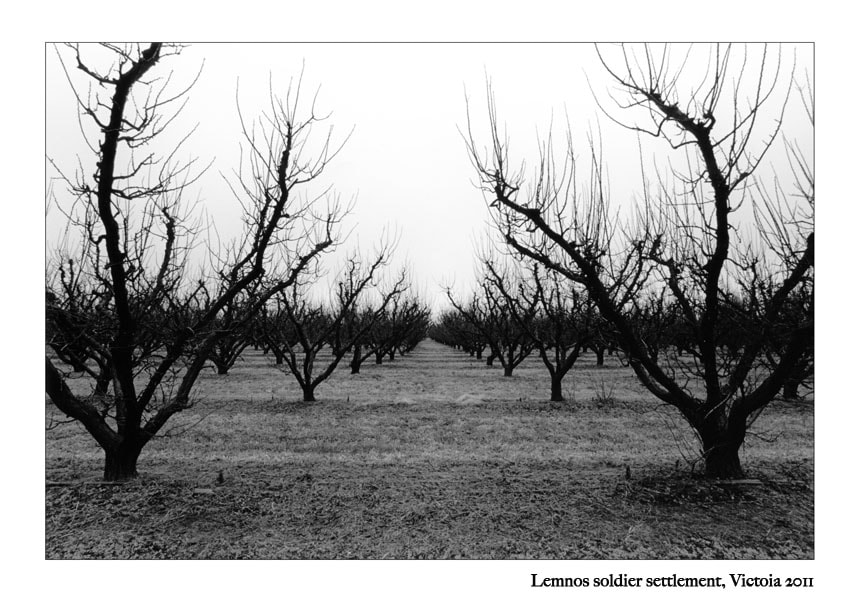 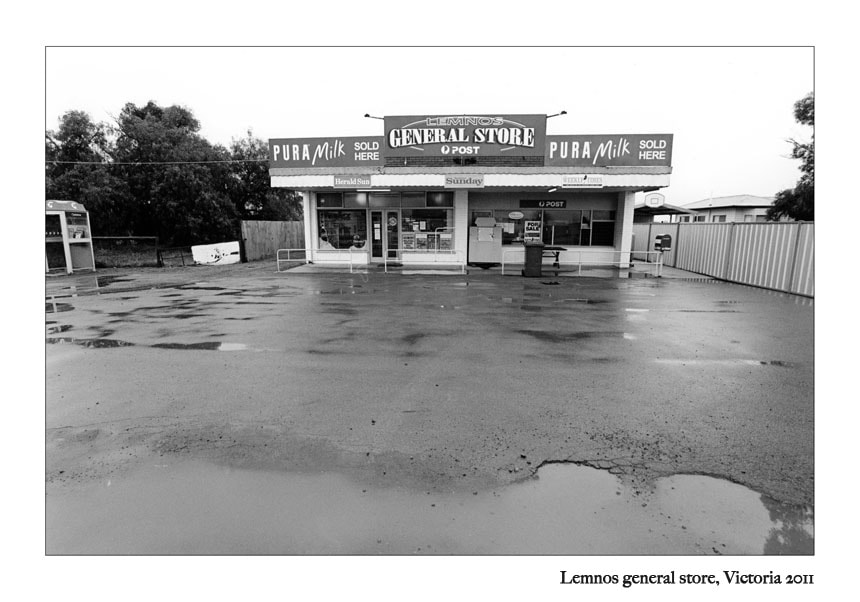 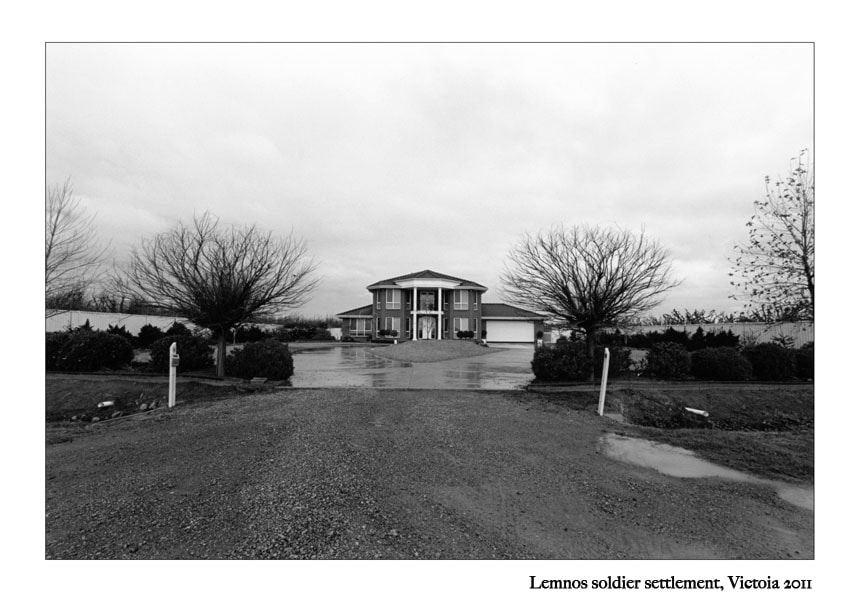